THE LIFE AND DEATH OF TOMMY CHAOS AND STACEY DANGER

Dinosaurs have invaded Earth, but now that they've met each other, neither Tommy Chaos nor Stacey Danger care anymore. They escape the war, but whether they dive to the bottom of the ocean or fly to Outer Space, conflict alway seems to find a way into their lives. 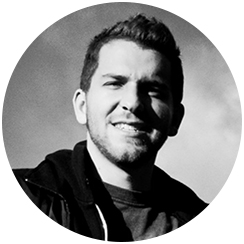 Michael Lukk Litwak is a Brooklyn-based filmmaker that was born and raised in Los Angeles. His work often focuses on themes of identity and absurdity, seen through a lens of classic genre films. His NYU Thesis film "The Life and Death of Tommy Chaos and Stacey Danger" took home NYU's top prizes and played at more than 30 film festivals around the world.

In this short film about a couple’s budding romance — featuring an army of Tyrannosaurus Rex — Michael Lukk Litwak takes the audience on a wild ride with his quirky characters and inventive storyline. Litwak expands on the inspiration behind his work and what was required to bring his submarine set to life.

PBS: A war with dinosaurs, space, a bear dodging laser beams and romance. How did all of these ideas come to you to ultimately form this love story?

MICHAEL LUKK LITWAK: It happened little by little. I knew I wanted to tell a story about the decay of a romantic relationship but felt like it wouldn't be complete unless it acknowledged the flipside as well: the joy that relationships can bring and how they force you to re-examine yourself as a person, a process that can be really scary but ultimately makes you grow. So I was playing around with the idea of love being this grand adventure while also thinking about how the real world is a crazy place where not a lot of stuff makes sense anyways. I had built some cardboard sets in the past so all of these things combined into a process of thinking about what resources I had access to and the story I wanted to tell and it grew from there.

PBS: What went into the props, costumes and set creation?

MICHAEL: We had a really amazing production designer (my friend Taylor Shung!) and giant art team that contributed a lot of time and energy into making all the sets by hand. We made an effort to build as much practical lighting into the sets as possible and have them thematically represent a different part of Tommy and Stacey's relationship. We decided very early on that if we were going to try and build sets that looked "realistic" that we were going to fail so we decided to lean in and embrace the artificiality of everything especially since it fit in thematically with such an over-the-top story. We actually made a behind-the-scenes video that goes through the process of all of that.

PBS: Humor aside, there’s a serious message here about relationships, trying to keep love alive, and heartbreak. What do you want people to take away from the film?

MICHAEL: I think there are a lot of really bad love stories out there that give people false expectations for what their relationships are going to be like. You're inevitably going to disappoint and frustrate your partner at some point in your relationship because literally no one is perfect, but being able to learn from your mistakes and grow as a person through your relationships — both with your romantic partners and with your friends — is what makes those relationships exciting and worth your time and energy in the first place. Anyways, if the film can do anything I hope it can make people feel that it's okay to have doubts or be uncertain about those kinds of things, and that that those are not just a means to an end, but the end itself.

PBS: What was it like working with Doc King and Valerie Brody? How did you know from their auditions that they would be right for the roles as Tommy Chaos and Stacey Danger?

MICHAEL: They are both such wonderful people and were great collaborators. We had a lot of people read for both roles but when they read it was immediately clear that they got the tone and knew that having a more understated performance was what was going to ground the movie from all of its other crazy elements. We did a couple of rehearsals and all hung out a little bit just to get comfortable around each other and I was so impressed by them by the end of the process. They are both very youthful but also had a lot of maturity and interesting life experience behind them that I think they were able to funnel into their roles.

Film School Shorts is a national half-hour weekly broadcast and online series that showcases short student films from across the country. Grouped together around a central theme or topic, and featuring production values that rival their indie film counterparts, KQED is proud to present award winning entertainment to a national audience.

KQED Public Television 9 is one of the nation's most-watched public television stations during primetime. KQED produces and acquires programs that inspire, inform, and entertain the people of Northern California. KQED broadcasts the best available programs from PBS, APT, and other distributors, and also produces its own unique national and local programs, series, and specials. Airing more independent films than any other public broadcasting station in the country, KQED is committed to bringing the work of local and independent film producers to the community.