On the outskirts of Los Angeles, Rosemarie and Ray pass time in an apartment packed and cluttered with the detritus of a half century of marriage. With their meager social security checks gone straight to covering rent every month and nothing in savings, Ray collects cans to get a little cash together so he can grant Rosemarie her one and only 90th birthday wish: a trip to In N Out for hamburgers. 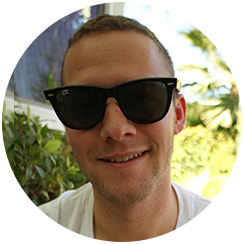 Jason Tippet grew up in Santa Clarita, California, a where he went on to graduate from California Institute of the Arts in 2009. He directed a short documentary called Thompson during his final year at CalArts that played Sundance and won the Jury Award at SXSW. Shortly after that he began filming his first feature documentary with Derek Waters (Drunk History) called "Only the Young." The film went on to be programmed in PBS's POV documentary series. Jason and Producer Joe Callander were named 25 New Faces in Filmmaker Magazine in 2012 & 2014. Jason recently finished working on season three of Drunk History for Comedy Central and is now editing Davy Rothbart's new film for Beachside Pictures.

Ray and Rosemarie are the idyllic couple. After decades together, their love for one another remains stronger than ever. Whether chowing down on burgers and fries or relaxing with them by the pool, Filmmaker Jason Tippet had the opportunity to work with Ray and Rosemarie on this short film capturing their day-to-day. PBS spoke with Tippet to learn more.

PBS: Bird watching always seems to be an activity associated with the elderly, but this imagery is used quite often throughout the film. Why did you choose to include this? For you, what is the symbolism behind it?

JASON TIPPET: Ray would bring stale bread to feed the crows along the Los Angeles River so it didn't go to waste. They both loved birds, and seemed to believe that birds were these vulnerable and helpless creatures. I saw some of that fragility in Ray and Rosemarie too. Like so many older people, they are stretched thin and teetering on a very precarious perch. All they have is each other. As Rosemarie watches a solitary hummingbird flit away from the feeder toward the end of the film, she says, "They're here, and in less than a second they've gone away." It struck me that if you view it with enough distance, the same could be said for all of us creatures big and small.

PBS: How did Ray and Rosemarie’s story come to you and what was their initial reaction about being involved in a film?

JASON: Rosemarie and Ray lived in the apartment below me in Sherman Oaks. Every once in a while, before work I'd have coffee and watch the hummingbirds with Rosemarie. One morning I walked past her on my way to work, she was sweeping up leaves in front of their door. She said something like, “Can you believe I turn 90 in a week and Ray still expects me to sweep the walkway?” I asked her on the spot if she’d be willing to do an interview. It still feels pretty intrusive to me to just ask somebody if I can interview them. I hate doing it. But the only thing I hate more is letting a good story slip by.

Rosemarie took some convincing to agree to be filmed, but she came around to it. A big draw for me was that she seemed to be one of the rare people who is unaffected by the camera. I felt like I was talking to the same person whether the camera was rolling or not. I love the way she phrased things and how excited she’d get about the birds and talking about Ray and his collecting, and I especially loved her big aviator glasses. She wouldn’t step outside without them.

Ray was fine with being filmed, but hated how long it took me to set up a shot, or get in the car with all my equipment when he was ready to go. Ray’s favorite part of the filming was giving me a hard time. We had fun together.

PBS: It’s so fascinating to see how much Rosemarie loves In-N-Out Burger. How did this conversation first come about?

JASON: We were a week or so into filming and Rosemarie was watering the plants. I came home with In-N-Out for lunch one day, and when she saw that greasy white paper bag she just went bananas. Probably the most excited I've seen her. I gave her one French fry and that turned into “you can just have them.” I asked her what she had planned for her birthday and she said she’d probably just sit out and watch the hummingbirds. But Ray saw how turnt those fries got her and ended up surprising her by taking her to In-N-Out for her birthday.

PBS: Whenever Ray and Rosemarie are watching TV, there’s always a war movie on – perhaps the same one. What was the reason for including and concluding with this?

JASON: Yeah, “Windtalkers,”starring Nicolas Cage and Adam Beach. Ray taped it off TV, he liked that one. It was something my Grandfather did as well. He was a WWII veteran and would watch war films every night before bed. He never wanted to talk about the war but could watch those films for hours. Maybe it’s cathartic, or nostalgic, or something else altogether, it’s tough to say.

At the end of “Windtalkers,” the men charge the hill, and if you took the hill that meant you were going home. Maybe to meet a nice girl, buy a house, start a business, raise some chickens. Ray came home, started a moving business, it didn't work out, bought a house and couldn't afford the payments, lost the house. Most things just never really worked out for Ray. But what did work out was finding the love of his life, and the years they spent together.

POV, a cinema term for "point of view," is television's longest-running showcase for independent nonfiction films. Since 1988, POV has presented more than 300 of the best, boldest and most innovative documentaries to PBS audiences across the country. POV films are known for their intimacy, their unforgettable storytelling and their timeliness, putting a human face on contemporary social issues.