Six-year-old Samantha and her father are moving away from their Texas farm after a recent tragedy, and as they pack up their old pickup truck, Samantha realizes her father hasn't left any room for Peppermint, her favorite pet. When running away with Peppermint doesn't work out, Samantha comes up with an idea to save Peppermint and help her father out at the same time. 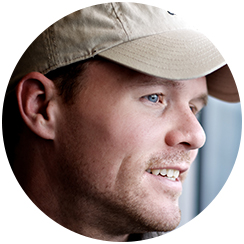 Splitting his time between the U.S. and China, Texas-based filmmaker Jay Hubert began his professional career as a DP in China after studying in the prestigious cinematography department at Beijing Film Academy. He then worked as an assistant to top-tier Chinese cinematographer Wang Yu on numerous commercials and feature films for several years. More recently he has shot and/or directed a number of commercials, documentaries, and promos for clients such as Apple, Volkswagen, Peugeot, Intel, Lenovo, China Unicom, Xiaomi, Evona, Nylon, and Vanke, while also working on several Chinese feature films. In 2013 he served as Director of Photography for Volkswagen Group China's "People's Car Project - Building the Car Series," a 10-episode web series awarded a Gold Lion at Cannes Lions. Hubert has written and directed over two dozen short films, many of which have screened and won awards at international film festivals. He is fluent in Mandarin and Japanese, and conversant in Cantonese and Korean.

When tragedy takes place close to home, a young girl finds solace in her best friend Peppermint. Though an unusual peer, Peppermint’s presence helps young Samantha as she navigates a difficult time in her life and a rocky relationship with her father. Speaking with PBS, Director Jay Hubert discusses the star of his film and the inspiration for the story.

PBS: Mara-Catherine Wissinger did a great job in her role as Samantha. However, I can imagine that directing children is much different than directing adults — they might require more takes, become distracted easily or  need more guidance. What was it like working with Mara-Catherine, especially as the main character of your film?

JAY HUBERT: They say in filmmaking that the three things you should avoid most are working with children, animals and the weather. And yet the idea I came up with for my first narrative film at UT was one involving all three of these elements. I was definitely worried about working with a young actor for the role of Samantha, as we were only allotted three days to shoot, which for this script would have been ambitious even with professional adult actors and a professional crew. I auditioned more than 30 girls around Texas, many of them through Skype, and Mara-Catherine was the second to last one that I interviewed. And even through Skype, I could tell she had a real presence, and she was totally focused for the 30 minutes we talked. I knew I had found my Samantha.

It wasn't until we got on set that Mara-Catherine really blew my socks off. We shot long 12-hour days almost entirely out in the sun, and she was the most focused, most committed person on set (and her wonderful mother came in close second, which is always a huge help and relief when working with children). She never complained, she took direction extremely well, and when we had time to do extra takes, she always gave 100 percent, even on the fourth or fifth take. She truly was amazing to work with, and I've shot quite a few films with kids in lead roles and know how hard it can be to keep them focused at times. That was never a problem with Mara-Catherine.

We were all extremely nervous about shooting the scenes with her and Daisy, our 14-year-old 1,600-pound cow that was fortunately a former show cow and raised by a young girl. Still, Daisy had lost an eye to cancer the year before, and she had never been on a film set surrounded by lots of people and equipment. We had safety precautions in place, but we were all still holding our breaths in the few shots where Mara-Catherine had to directly interact with Daisy or lead her across a field by herself. Mara-Catherine had only just turned eight, and I don't know many eight-year-olds who've never been around animals much who would step into those shots and play them as well as Mara-Catherine did. To me, her courage was even more impressive than her great work ethic and outstanding performance.

PBS: It was heartwarming to see the bond that you captured between Samantha and her pet cow, which is much different from the standard domesticated animal (like a dog or cat) that children come to love. What went into the decision to  feature a friendship like this?

JAY: My parents own a farm — we shot the entire film within a two-mile radius of the farm — with several Irish Dexter cows, which are smaller than most breeds of cows. My two nieces, who I was living with at the time, had named each of the cows when they were born, and my older niece had claimed the one she named Chocolate Sweetie, while my other niece — five years old at the time — had laid claim to the one she named Peppermint. It was this younger niece and her adorable love for Peppermint that inspired the initial seeds of the story.

PBS: During the film the audience sees Samantha’s bold decision to trade her mother’s wedding dress for Peppermint. Typically parents are the ones who help their children cope with grief but Sam does this to help her father move on. How did this storyline come to you and what was the decision for this type of role reversal?

JAY: Originally I had pictured the film as more of a comedy shot very stylistically from the daughter's height so we wouldn't even see the adult's faces, and it was much more focused on Sam's relationship with Peppermint, but I decided I wanted the story to be more about the father and daughter, and realized I needed some sort of motivation to drive them away from the farm and from each other. The loss of the mother fortunately was not inspired by events in my own life, but the idea of the mother and wedding dress came to me at the same time and stuck. I didn't necessarily think of Sam's actions and decisions as a reversal of the normal grieving process, but more as a display of how young children deal with grief differently than adults. In this case, Sam's father's reaction is to sell the house and move away from their home as his grief overwhelms him, while Sam is focused on salvaging both her relationship with Peppermint and then her relationship with her father.

PBS: The beginning of the film opens with a view of a broken porch swing. Was this intentional to foreshadow the family’s loss?

JAY: Yes. That shot was not scripted, but the swing was already there, and when I arrived on set early the day we shot at the house it looked beautiful in the morning light, and I really liked it as a symbol of a beautiful, happy place that has fallen into disrepair as the result of a family tragedy. I also like that at the same time it informs the audience of the setting in the opening shot.