QUE LEJOS ESTOY (HOW FAR I AM)

What happens to the Mexican traditions, identity and the ideologies of one family after three generations of assimilation into American culture? By bringing old photographs to life, the filmmaker attempts to find why things have changed, how traditions were lost and asks what makes him who he is today. 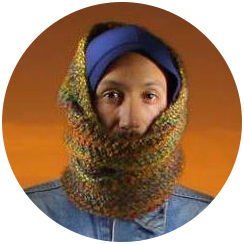 Evan Apodaca is a filmmaker and media arts educator based in San Diego. He received his Bachelor’s of Fine Arts from the School of the Art Institute of Chicago (SAIC) in 2009, was the recipient of SAIC’s full tuition Chairman Merit scholarship in 2007 and was resident artist for the International Symposium of Electronic Arts in Taos, New Mexico, in 2013. In 2014, he was the codirector of "Truth," a film screened at the San Diego Latino Film Festival. In 2015, Evan was the writer, director, editor, animator and cinematographer for films, "Que Lejos Estoy: Picturing Assimilation" as well as "The Making of Low & Slow," both of which were screened and exhibited in San Diego.

The exploration of identity plays a major role in Director Evan Apodaca’s film “How Far I Am / Que Lejos Estoy” as he speaks with his grandmother to learn more about his family’s beginnings. Why does he look and act the way he does? How would his grandfather feel about his upbringing? Apodaca opens up to PBS.

PBS: There’s an interesting style to your film with the large use of still photography, the animated mouths over the images, and so on. What went into the making of this and your artistic choices?

EVAN APODACA: My intention behind using family photographs and bringing them to life was to reimagine and interpret our past for myself to really understand how we've assimilated over time. People’s pasts can exist as strongholds or constrictions to the present and its ability to define itself and quite possibly even more so with trauma. I wanted to have as much of a say in interpreting myself, as did my family's history itself in defining me. However, I have not come close to experiencing the kind of estrangement, discrimination or cultural assimilation that my family has experienced in the past so I had to simultaneously be respectful of that fact and realize my own privilege in this matter so as not to co-opt a people's struggle that I have not undergone. Hence, using the term "picturing" assimilation because it is about reinterpretation as opposed to objectivity per se. [As the] director, cinematographer, editor and animator of this film, a lot of the "picturing,” interpreting or reimagining came while editing and animating as opposed to when filming.

The whole process was in a way very organic though because my original goal with the story swayed quite a bit into many other directions. Before starting the production of this film I was frightened that I wouldn't be able to pull off a story about the past because I was unsure how to incorporate main characters that are non-living or how to visualize events and emotions that I didn't have present access to or that haven't really been documented. The idea of the everyday historical documentary didn't even come to mind. My only solution was to literally bring the photos to life through animation, showing family members' emotional reaction to personal topics and so forth. It was a very gut reaction and it felt like my only choice at the time.

Way before beginning to incorporate myself into the story, I began interviewing my grandmother and digitizing family photographs to visually construct my story. Also at the time, I was unsure about the core of the story. I thought it was going to be about just her, but I hadn't realized what deeper thing I was digging for yet. It wasn't until I had cut quite a bit of the interview and animated a large section of it that I realized the reason I was wondering about the past was because I wanted to know about the present, who we are today, my family my grandmother and even myself. Like what got us here. I would listen back to her interviews and just piece together what internally interested me and pick out photos that had the potential to convey her thoughts and experiences. Then using photoshop, I took each family photograph into a process of cutting into layers to create moving parts, whether it be facial muscles, jaws, legs, arms, torsos, eyeballs, eyelids, et cetera. and then I painted in the backgrounds to compensate for negative space lost from cutting. Then I would take all of those layers I cut into After Effects and basically treat the layers like puppets where the computer tracked my own hand movement and recorded it onto those layers. The whole thing including interviews, animation and editing took something like six months. I got a little better over time.

Later some advice was given to me that the only way I was going to get answers to my questions about the present was to incorporate my own thoughts into it and that if I was to have a voiceover that I should think about my audience, which is a common piece of advice I think. I took that advice very literally and thought that the only person I could really direct this to is my grandmother so I started writing my thoughts down in a diaristic format just responding free hand to her interviews. Then I would go back and rewrite my responses as if I was talking very directly to her. Calling her name, et cetera. It became a way to make what might have been the usual voice-of-god narration feel more natural, personal and conversational and then it became the whole essence of the film. I began feeling like it was more of an artistic expression as opposed to presenting just facts and that ultimately began to translate to visual experimentation with the animation (which is really evident 8 minutes into the film) along with how I visually portrayed myself in filming myself looking at photographs to represent my process of reflection.

PBS: Throughout the film you are really trying to learn more about yourself and your identity, where you came from and why you are the way that you are. When did these questions first start and ultimately evolve into the creation of this project?

EVAN: I think the concept of self begins to form with many people at a very young age. I think I've had an understanding for a long time that people in my family have a cultural history that I hadn't experienced to the fullest and that my physical attributes don't express the heritage that I associate with my family. Meaning I knew as a kid that even though I look white, my family who raised me does not identify as white, but maybe the pride of being Mexican-American had rubbed off on me a little.

I knew where my family was from in Mexico and that later they lived in East LA, which within the family is a place that holds a kind of a nostalgia. The questions have always kind of been under the surface and once and a while comes up above the surface though oral family stories. As I got older and began to hear statements from adults that seemed like they were unaware of Mexican-American history, I began wondering why that history could have become forgotten. I learned that forgetting is a part of American culture. Although I think the region that I live in (Southern California) holds that history so its always there with a living breathing pulse. From friends, books and art I could learn about social movements as well. Furthermore, our grandparents hold so much history so how could one not want to listen. In starting to want to document these stories it was not about my own identity at all, but I realized at some point that my grandmother's story was inextricably about me. It's unavoidable.

PBS: What was it like for you to hear about the cultural rules that your grandmother had to adhere to and how things have progressed over the generations?

EVAN: First of all I had to realize that not only is there a generational gap between my grandmother and I, but also a gender gap. Even though I was raised primarily by women in my family, I cannot fathom or be able to understand the realities of gender inequality when she was a kid let alone the racial inequalities. The kinds of patriarchal oppression that women have had to survive and overcome can be carried on through generations, and that carries over into racial inequality and culture, as does the trauma. So all of that is tough for me to imagine having to experience. One of my biggest interests other than that was to understand how and why identity and cultural and immigrant struggles become disassociated with over time and generations. I know my grandfather was hard on her with rules, but with some of them, I think he was attempting to preserve his family's culture and pride. A lot of times I find the loss of cultural practice very sad. That's one of the questions I'm asking her through out the whole film. I treated that curiosity as if I was a little kid again sitting on her lap and asking away.

Cultural memory is such an interesting thing to me. A lot of the stories my grandmother shares I had heard many times before so it really is like a ritual in the literal sense. But they might not have made a whole lot of sense then so this was my chance to truly understand. Furthermore there are a lot of forces against cultural memory. From the city itself, to popular culture, to the government and even aging.

PBS: What did you hope to achieve after filming this? Do you feel all your questions were answered and is there a conversation you hope others will have about their own identity/families?

EVAN: I was attempting to understand our identity, my identity and why have things become seemingly forgotten. I think in this kind of personal story it is natural for others to see something of themselves or for them to ask their own questions about identity. I don't think my story is entirely universal. Everyone's outcome can be similar or extremely different, but immigrant histories can become unifying. I think it’s about ethics too though. Beyond all of the remembering I hope people ask themselves- how can I best look at the past so as not to wrongfully appropriate it? In the case of documentary, it is not always about facts etched in stone. It can be a creative social reality.

The National Association of Latino Independent Producers (NALIP) is a national membership organization that addresses the professional needs of Latin@ content creators. We stand as the premiere Latino media organization, addressing for fifteen years the most underrepresented and the largest ethnic minority in the country. NALIP was rounded in 1999 by a group of Latino producers, content creators, academics and media advocates. During the first NALIP conference in San Francisco in June 1999, NALIP was organized by the conference participants, and the mission and organizational guiding principles were adopted.

NALIP has had success holding thirteen National Conferences, plus six other National Initiatives: a Latino Writer's Lab™, a Latino Producers Academy™ and a published/on-line Latino Media Resource Guide™, our "Doing your Doc: Diverse Visions, Regional Voices" documentary development workshops plus the Latino Media Market™ held during our National Conference and the Latino Artist Mentoring Program. We are now fundraising to support and expand these programs in 2013, plus solidify the infrastructure of our organization to better serve our membership and community.