Three miles outside the village of Quinhagak, archaeologists and locals are in a race against time to save thousands of artifacts being carried away by erosion. Dr. Rick Knecht and his team work around the clock to preserve the past for future generations. 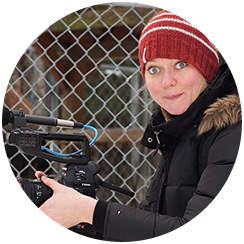 Kaysie Ellingson joined Alaska Public Media's team in January 2015. She made the move from Southern California to Alaska in pursuit of a cooler climate and quirky stories to tell, and that's exactly what she found. Before her life as a video producer at Alaska Public Media, Ellingson was an English major at Concordia University in Irvine, Calif., a peace corps volunteer in Kazakhstan, and finally a journalism graduate student at the University of Southern California. 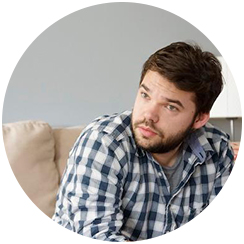 John Norris attended the University of Alaska Anchorage where he earned a journalism degree. He immediately put said degree to work as a photographer and web producer at Anchorage’s KTUU Channel 2. After years of making music videos and short films, Norris started the annual Anchorage 48-Hour Film Challenge, which has grown to be the largest film competition in the state with over 23 teams competing and multiple sold out screenings. He has worked at Alaska Public Media as a video producer for over two years.

Near the village of Quinhagak, Dr. Rick Knecht is diligently working to protect the history of an Alaskan community. With an eroding shoreline and unfavorable weather conditions working against him, his commitment to this project is moving. John Norris and Kaysie Ellingson take us back to the Nunalleq archaeological site and reveal the history behind the land and their favorite artifacts.

PBS: What was it like to witness Dr. Knecht and his team’s hard work and determination to uncover what remains?

JOHN NORRIS: For me, it was really eye opening to see all the work Rick and his group were doing. I always imagined an archaeology dig as a few people delicately brushing dust off of pottery, but in reality it's a huge undertaking. The researchers spent full days hauling five gallon buckets of dirt and mud back and forth and pushing that muck through screens. Just to see the amount of dirt they had to move each summer — all by hand — was just stunning.

KAYSIE ELLINGSON: This was probably one of the coolest shoots I've experienced because you could feel the passion from the entire team, especially from Dr. Knecht. I always find that when I'm filming with someone I, in a way, take on their passion and am even more inspired to tell a story well because of that. After the two days we spent with them, I definitely felt a major responsibility to do their story justice.

You could feel the sadness when Dr. Knecht talked about the number of artifacts they know have been lost due to erosion. Since 2009 until now, I think they've lost at least more than 30 feet so you can only imagine how much [the locals] have lost in total. It was amazing to come at the end of their season to see this exhausted team still working tirelessly until the very last hour to uncover as much as they physically could.

PBS: Rick discusses the less-than-ideal weather during the excavation. From your perspective, what were the challenges of filming in those conditions?

JOHN: Weather is nearly always an issue when filming in Alaska, but we were lucky to get some really nice weather when filming at the Nunalleq site. The only downside was the vicious hordes of mosquitoes. I might have preferred rain and wind.

KAYSIE: The weather was absolutely beautiful when we were there, but the biggest challenge, hands-down, was the tiny bugs that were like microscopic mosquitos. They stuck to you. They'd fly into your pants, up your nose, everywhere. They were inescapable. The team had this spray (not sure what it was) but it was basically so strong it would kill them as soon as they landed on your skin... but they were still having to wipe off the dead little bodies. It was pretty terrible.

PBS: What was the most interesting find that the team discovered through filming?

JOHN: The group found a ton of really amazing artifacts at the site, but one thing I thought was really cool was that they found a bunch of human hair that was the remains of some ancient haircuts. For some reason, that really stuck with me. While it's really awesome to see the remnants of a kayak or a hunting spear, it's the mundane stuff like cooking utensils and hair scraps that remind me that these were just people living day-to-day not too unlike how we live today.

KAYSIE: While I was there, I think the most interesting thing I saw them find were the oyster shells... or the woven basket. I can't decide. The oyster shells were cool because there are no oysters anywhere in that area today, so either there was some serious climate change or they were trading with faraway people. Little findings like that really cracked open some serious mysteries about the people they were learning about.

There wasn't anything super interesting about the basket other than it was extremely intricate and that pattern is one that has been passed down the generations for so long that current residents of Quinhagak have been taught that method of weaving. That tidbit was actually one of the most interesting things I learned doing the research beforehand; it's actually what really drew me to this story. But if you were to ask the people involved with the dig, they would all agree that the walrus mask they uncovered was the best find of the entire dig. It's shown in the video, but I don't think that sound bite was included. It's the brown mask with the tusks coming out of it. It was so well preserved that there are still walrus whiskers on it.

PBS: What do you feel your film means to the local community and what message do you hope it will send out to future generations?

JOHN: Getting to see the local community explore some of the artifacts the team found that season was great. Watching elders describe to young kids how certain tools were used really shows how these communities in rural Alaska have strong connections to the past. I think the hope is that the research being done in these communities inspires people to build on those traditions and keep that connectedness to the land as they move forward.

KAYSIE: I like to think that this film helps to preserve a piece of this community's history. Who knows if next summer that site will still be there. Like Dr. Knecht said, one big storm could completely wipe it out. I'm happy that we were able to go out when we did to capture the boardwalk they uncovered and the different rooms of the house. They're documenting these findings on paper, and preserving the smaller pieces they find, but I don't think or know how they can preserve something like that.

I think Alaska Natives and Native Americans have been historically told by westerners that their history doesn't matter, that their oral history and legends aren't true. But this project has really helped to shatter that idea — this project meaning the excavation, not necessarily the video. One unique thing about this dig was the community aspect. Usually — from what I've read and heard — Native communities really don't like archeologists coming in to dig on their site because it sometimes contradicts local legends and disproves beliefs. In the case of the Nunalleq dig, the archaeologists were completely embraced. This project has actually inspired kids from that village to pursue careers in archaeology, which I thought was a very touching element. And it has actually verified those local legends and provided a lot of insight on how the locals lived at that time.

That's a long-winded non-answer, but basically I'm just honored were given the opportunity to document that process and I hope that it will stand as a video that could educate future generations even after that site is washed away.

Alaska Public Media harnesses the power of multiple media platforms to make a more informed and connected life possible for all Alaskans. Alaska Public Media produces and presents news and content that provides lifelong learning opportunities in public affairs, health and leisure, science and nature, economic and social development, civic engagement and world events. The company is located in Southcentral Alaska and is comprised of KSKA radio, KAKM TV and alaskapublic.org. Alaska Public Media also operates the Alaska Public Radio Network (APRN) and a shared television service with KTOO in Juneau and KYUK in Bethel. Alaska Public Media and its affiliates deliver content that reaches 96% of the population of Alaska.