After experiencing a shootout in her neighborhood, Anayansi, a pregnant teenager, fears that she will lose her child. Hoping for a miracle, her mother takes her on a pilgrimage to the festival of Saint Francis. As their journey merges with thousands of travelers from across Mexico, they must face the reality of her condition and escape the confines of tradition if she is to survive. 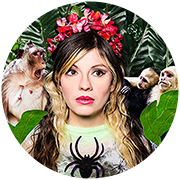 Ivete Lucas was born in Brazil and grew up in Mexico. At age 22 she received a grant from the Mexican Film Institute to direct her first short film ASMA, which was shortlisted for the Mexican Academy Awards. Since then, she has produced and directed a number of award winning short films and documentaries. She is currently producing a feature film for artist Keren Cytter and finishing post-production on her first feature documentary VIETNAM APPRECIATION DAY, which she co-directed with her husband Patrick Bresnan.