Linda Horowitz, a Romantic Comedy screenwriter, gets a threatening message from her agent urging her to pen a thriller. Hollywood Studios are not buying optimistic films anymore and she needs to write darker stories if she wants to survive in the industry. She tries to produce a sinister script about a hitman, but when the character is about to kill another man something unexpected happens. 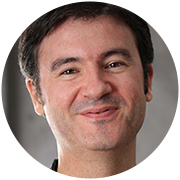 Alvaro Ron has written, directed and produced numerous award-winning short films including "The Red Thunder" and "Behind the Curtain" starring Emmy Award-winner Peter MacNicol. He has produced and directed critically acclaimed TV shows including the Spanish version of the BBC Series “Life on Mars.” Ron’s producer credits include films like "Americano" (directed by Kevin Noland; Starring Josh Jackson and Dennis Hopper) and “Green Zone” (directed by Paul Greengrass; Starring Matt Damon, Amy Ryan and Greg Kinnear). Alvaro Ron is a member of the Producers Guild of America (PGA), Film Independent and the National Association of Latino Independent Producers (NALIP).

CET & THINK TV are Southwest Ohio’s leading providers of education and enrichment in living rooms and classrooms. Serving more than 3 million people in Greater Cincinnati and Dayton, our mission is to strengthen the communities we serve through programs and services that inspire and inform, educate and engage, fostering citizenship and culture, the joy of learning and the power of diverse perspectives.